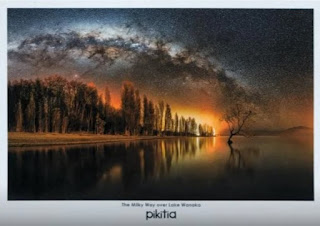 Most people probably know that New Zealand is located in the South Pacific Ocean, near Australia. This country actually has 600 islands, but the main population resides on only three of them. Volcanoes, lakes, valleys, fjords, beaches and mountains - you can find it all there.

It's the land of sheep because they outnumber people 9 to 1. While there are less than 9 million people in New Zealand, it translates to a lot of sheep. However, you won't find any snakes here. The country has three official languages: English, Maori and Sign Language.

Fun Fact: New Zealand was the first country to allow women to vote in 1893.

This postcard was randomly sent to me through Postcrossing.

I know NZ looks like heaven in the Tolkien movies. Congratulations and getting through A2Z. I've enjoyed your postcards very much.

And this is the place where The Lord of the Rings has been shoot ;)) Visiting from the Road Trip, and glad to find your blog!
AtoZ Road Trip