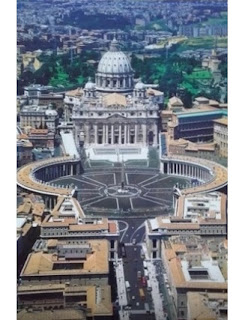 Vatican City, also known as Holy See, is the smallest country in the world. Located in Rome, Italy, it is one of the most fascinating places in the world. While it's only one-eighth the size of New York's Central Park, this independent city state prints its own currency and stamps, issues license plates and passports, and even has its own flag and anthem. In 2019, about 1,000 people lived there.

Fun fact: With so much unique stuff that I already mentioned, it seems difficult to come up with a special fun fact. You probably know that the Pope has its own mercenary force called the Swiss Guard (made up of Swiss citizens since 1506). While the guard is ceremonial, each member is highly skilled and especially trained in marksmanship. Well, my partner Tom works with someone who was a member of that guard.

You might think that cards from the Vatican City (mailed from there) are difficult to come by. However, it's not quite as hard as it might seem. You simply need to know someone who lives in Rome and is willing to take public transportation to the Vatican to mail a postcard from there.

That's what I did. This postcard cost me 8 quarters. That's it. My trading partner collects coins, and among those are the quarters that have the state's names on them. I love the stamp and cancellation that came with the card. 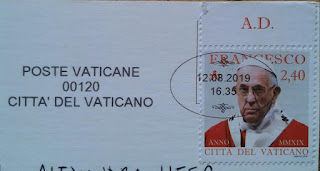 Cool facts and so strange a place like the Vatican exists. Tom Robbins wrote a book (fiction) that includes those Swiss Guard troops, called, "Another Roadside Attraction." I bet your partner's co-worker has some very interesting stories to tell.

I was going through an box of old stuff a while back and came across postcards that my ex had sent while he was deployed on ship in another lifetime. He send a couple from the Vatican.