A to Z Blogging Challenge 2018: I is for Irregularly Shaped Postcards 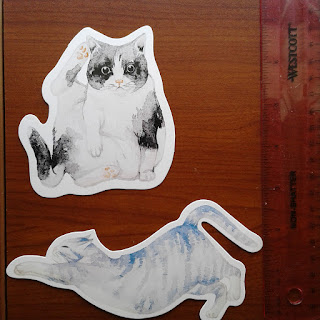 What constitutes an irregularly shaped postcard? Technically, it's an odd-shaped postcard, but I needed a topic for the letter I. To me, it's any postcard that isn't rectangular or square. Although, the USPS has strange postal regulations that can be difficult to understand but include that a postcard has to be rectangular. From what I gather, the regulations are so finicky because of the U.S. sorting machines.

Those machines seem as angry as their human counter parts. I get damaged mail all the time. I wonder how mail then moves in other countries where you are allowed to mail things that you can't mail here supposedly?

For example, I have received a few square postcards (mainly from the Netherlands where these seem popular). Doesn't mail that comes into the country have to ride the sorting machines here too? The square postcards arrive here just fine. Or perhaps they're being hand-sorted?

I do know that some mail qualifies as "non-machinable" and there is an extra postage fee for that because this mail has to get hand-sorted. So, it's possible that the square ones get separated when they come in and get processed by hand. (Of course they can't charge me for that as the senders already paid correct postage in their country). I would ask my local postal workers, but they're grumpy, except for one lady, and I usually forget what I want to ask when I see her.

Anyway, while our post office might deem square postcards odd-shaped, in this context I am referring to what I stated above (non-rectangular and non-square). Until I started exchanging postcards, I had no idea that they even came in shapes other than rectangular.

For example, I received a postcard from South Korea that has cat ears. It was sent without an envelope, and I would have been quite upset had it gotten damaged. The post office did good on this one. So, that was my first odd-shaped card that I received.

What totally blew me away though are the cat cards that you see above (the ruler is to give you an idea as to their size, which is smaller than a regular postcard). Not only are they odd-shaped, but they also don't fit the size regulation of the USPS.

That's right, postcards here have to be a minimum of 3.5 x 5 inches. (I believe letters have to be at least that big too because of those dreaded machines. I did receive an international letter once that was only 3 by 4.25 inches. While it did get here, it was all wrinkled and abused by aforementioned machines). I also received a postcard that was 3.5 x 4.25 inches (the size of a Polaroid, for you older folks like me) from Taiwan (without an envelope). This one survived without problems, amazingly!

The USPS also has maximum size specifications, but I don't want to get into that right now because it will be addressed in a future post soon. Anyway, as you can see by the picture below that I took of the reverse, these cute cat cards have all the makings of a real postcard: lines for the address and a stamp outline for the postage stamp. Luckily, the sender put them in an envelope and mailed them that way.

It makes me wonder though: If they make cards like these, does that mean in other countries you can actually send them through the mail without an envelope? Don't other countries use sorting machines? So, the cat-eared postcard from South Korea is, so far, the only odd-shaped card I have received that was sent the way a postcard is supposed to be sent (without an envelope). That doesn't make the other two less special to me though. 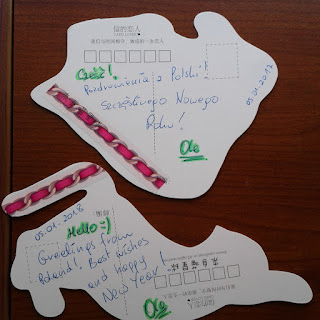 I am glad they tell you where to put the stamp. lol

love the idea and look forward to trying it out. dont mind sending postcards but have never thought of' a shape'.
each year here( stheast coast of NSW, Aust) one of our local galleries has a postcard exhibition and it can be in any medium as long as they conform to standard postcard size - I wonder how they will go with irregular shapes. nice to meet you.

I can't remember ever seeing any irregular postcards, but I know I'll be looking now! Do you think the Post Office dislikes them? I mailed a letter recently and because it was snowing, I put it inside a ziplock bag and clipped it on the outside of my mailbox so the mailman saw it... It took forever to go from CT to Ga... it finally arrived and still inside that baggy! I have done that before and my regular mailman always left me the baggy, but this new mailman just sent it on its way inside the plastic baggy! I'd love to know what everyone thought as they came in contact with the baggy... you'd think they must have wondered what's wrong with this person?

I recently came across some postcards that my Great Aunt sent to my Grandmother about 60 years ago. One of them was a bouquet of flowers, shaped like that. I thought that was great. Glad to know there are others still out there today!
Enjoyed your post!
Kimberly
PassingDowntheLove.com
Stopping by from the #AtoZChallenge Road Trip

Hi, Alexandra - I'm stopping by from the #AtoZChallenge Road Trip. When I wss younger, I had a post card collection. I loved irregular shaped postcards...and I still do. I have never given too much thought to the sorting machines...but I have had several post cards and letters that had been mangled before I received them!

What fun! I've never even seen an irregularly-shaped postcard, never mind received one. Our S.African postal system wouldn't know where to begin. They have a problem sorting and delivering straight-forward mail! Stopping by from the #AtoZChallenge Road Trip! Loving my Fitbit

Stopping by on the #AtoZChallenge Road Trip.
This post was so informative! I had no idea that postcards could come in irregular shapes, or that the Post Office was so picky about it. The funny thing is that at my local post office there's this ad for "odd things you can mail" suggesting you can mail practically anything (safety cones, bikes, etc.) without about box. But apparently it'll cost you more to do that, lol!

What a fun and informative post, Alexandra. I'll have to take a look at some of your others. How wonderful that you have received the oddly shaped postcards intact.

I know for certain that my little Ecuador town doesn't have sorting machines since we only see the mail truck once a week. Perhaps in Guayaquil and Quito they have machines. I wrote about our mail in this post last year. The summary is I rarely get mail and have no address.

Stopping by from the A to Z Road Trip.
Emily In Ecuador

Love the idea of irregular shaped postcards :-)
If we do use machines to sort post in South Africa, they're probably infected with a virus to make sure that not all post arrives where it should ;-)

Ronel from Ronel the Mythmaker A-Z road-tripping with Everything Writerly: I is for Ill-prepared

Stopping by from the #AtoZChallenge Road Trip! I never actually considered the plight of irregularly shaped post-cards before! Interesting!

I know that square cards in envelopes cost a bit extra, so I think you are right about the hand sorting. I still have postcards from when I was young. They seem almost magical. They are a piece of art. I'm here from the A to Z Road Trip. Have a great week!