Blogging Challenge from A to Z 2018: K is for Korea 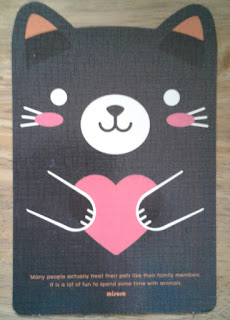 I'm pretty sure that most people know that there is a North and South Korea and their differences. What many might not know (unless you're politically savvy or followed the 2018 Winter Olympics) is that, in Korea, people don't refer to to the countries as such. Instead, it's the Republic of Korea (South) and the Democratic Republic of Korea (North).

Now, in postcard circles, people do use South or North, if they would choose to send one to the latter. I don't know anyone who has sent a card to the latter and if it would even arrive. Keep in mind that most of the postcard collecting community sets politics aside, focuses on the fact that most citizens don't want to be judged by the actions of their countries' leaders and that they like to collect cards from as many countries as they can. Plus, people in general love a challenge and like to obtain the hard-to-get.

Anyway, I have received one postcard from South Korea so far (obviously none from the other). Strangely enough, a couple of months later, the postcard site (Postcard Hub) matched me up with the sender of this card, so I got to send a card to her. It took 47 days to get to her but less than 20 for the card she sent to me.

The card I received from South Korea is a very cute cat card, as you can see. It was sent just like that, without the envelope, and I'm happily surprised that the USPS sorting machines (that seem as angry as their human counter parts) did not rip the card. Below you can see the postage stamps that were attached. (It says Gracie on the card because it was addressed to our cat). 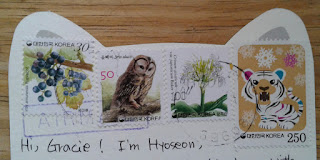 I'm enjoying my visit catching up with your earlier posts - that tiger stamp is as cute as the card itself.