Human Versus Cat Round 9 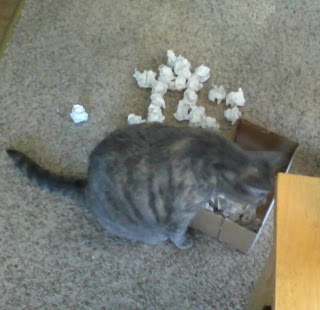 Okay, so I am super late posting the results for the Coca Cola 600. If you don't know what this is about, this post explains it. Well, we had Cable problems and missed the race. And a good one it was. It even was interrupted by a freak incident that caused two red flags. Of course Gracie and I made our fantasy picks beforehand, but I was not very inspired to post the results, but here we go.

Now, if you know anything about NASCAR you probably groaned when you read Reutiman's name, but probably thought that Carl, Jimmie and Kyle were safe bets. Surprise surprise, Reutiman actually ended up the second highest scorer with 23 and Kyle the lowest with 7. Jimmie only scored 22, Almirola 11, and Carl, her captain, a respectable 68.

Here is how it all came down: Gracie scored 131 points for this race and moved up to 39.4 percentile for all Nascar on Fox players. For the Brad Keselowski league she moved up to 763 out of 1202. As always, remember that her stats are skewed because she did not play the first 3 races of the season.

All good names, right? Well, the Biff only scored me 26 (and remember that team captains get a double score). Hamlin scored 41, Jeff Gordon 9 (thanks a lot), Kurt Busch 42 (and to think I wanted to change him, but could not get to the computer in time to do so), and Carl Edwards 34. Why did Gracie get 68 for Edwards? Because she chose him as her captain.

Posted by Alexandra Heep at 7:36 PM

Email ThisBlogThis!Share to TwitterShare to FacebookShare to Pinterest
Labels: Female vs. Feline: Follow how Gracie's Nascar picks stack up against mine, Stuff about Princess Gracie

At least you are still ahead of her!