Human Versus Cat Round 4 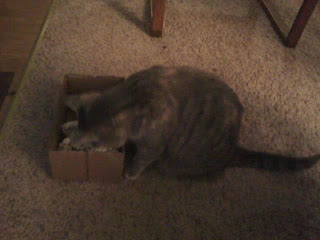 Gracie made her fantasy picks for today's NASCAR race in Texas on Friday morning. (If you don't know what I am talking about, this explains it). Well, at first we tried Thursday night, but she showed no interest in it. Even Friday morning, as you can tell by the picture above, she was not as enthusiastic as last week.

So, I dumped all the paper balls out on the floor. That got her going. You might wonder if she did not just bat them all, or several, around at once. Actually, no. The first four she picked one by one, only with the fifth numbered ball did she go kind of crazy. I waited until one "driver" was singled out, then we picked that one. 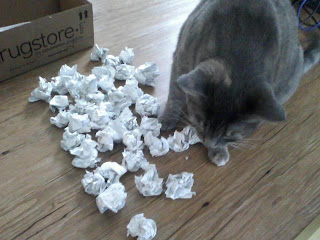 Here is what Gracie picked:

The interesting thing is that I mentioned David Ragan in an article I finished for a client the night before. Unfortunately, the poor guy has no chance of winning the race for the princess. We are also starting to see a pattern with Gracie's picks ... I will tell you about it in the following weeks.

Gracie scored 38, 43, 29, 23, 21 respectively. She got the second place right, Martin Truex. Despite that, she did not beat me, but it was a respectable showing. She scored 154 points for this race for a percentage of 11.5 overall with a total season score of 559. In her league (fans of Brad Keselowski) she ranks 1048 out of 1156. As always, remember that she missed the first three races, so the stats are skewed.

Here were my picks: (no, no photo of me)

She scored very well this week!