A to Z Challenge 2020: D is for Dominica and Dominican Republic 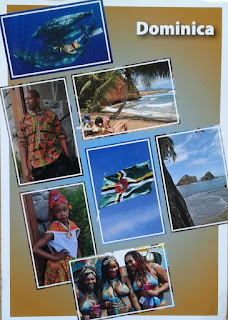 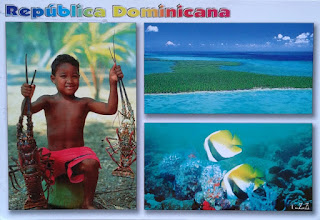 I had a hard time choosing which postcard country to do for "D," so I decided to choose Dominica and the Dominican Republic because people often mix them up. That is easy to do because of the similar names. The distance between the two countries is 624 miles (1,005 kilometers).

Dominica is an island located in the Lesser Antilles (Windward Islands). It's between Guadeloupe and Martinique (I would love to have postcards from those islands, but I don't have any). In 2017, it had about 77,000 people.

The Dominican Republic is part of the Greater Antilles and forms the island of Hispaniola along with Haiti. In 2017, it had about 11 million people.

Dominica's landscape has mostly rain forest and mountains. I am always surprised to read when relatively small islands have mountains! In this case, they are due to the island's volcanic origin. It actually has 9 volcanoes (non-active).

The Dominican Republic has some mountains on its west side, but has lots of plains, forests, valleys and plateaus. Of course it's known for its gorgeous beaches too. When you Google both countries, you can see the geographical differences.

Both postcards were trades by different people. Interestingly enough, the stamp on the card from Dominica says Commonwealth of Dominica on it while the Dominican Republic stamp is marked Republica Domicana. I didn't post the stamps because they weren't cancelled and aren't that breathtaking.
Posted by Alexandra Heep at 3:00 AM

Stamps are equally collectible and I can understand not being impressed with some of them ;)
https://katytrailcreations.com/2020/04/04/documentation-letter-d/

Beautiful cards, and I'm sure the countries are just as beautiful.

I learned something today about the two countries. Very interesting!

It's neat that you do postcard trades. This challenge is fun, and I'm learning a lot via your posts. Thanks.

What a great choice to highlight these two countries and emphasize their differences. It's lovely that you have such an extensive postcard collection, and I'm loving doing a bit of virtual travel with you.

Here's a place I have always wanted to visit! Maybe when this pandemic is over. :)

Dominica sounds like a true tropical paradise. Thanks for the geography lesson.