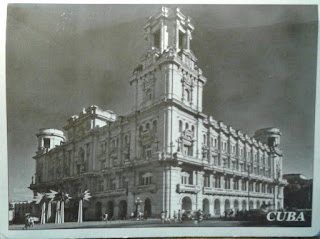 Cuba seems pretty fascinating to me. For one, it was like a forbidden fruit to people in the USA for over 50 years (trade embargo). Also, I heard that it seems like time stood still there. Most everyone has heard about the throngs of classic cars that navigate the country's roads.

Since I have never traveled to Cuba, I rely on the internet for information. That's why I really wanted a postcard from there. As you can see, the picture of the postcard I received does have that old feel to it, and not only because it's black and white.

I actually did get a postcard from Cuba before this one. It was quite a surprise because it came through a postcard exchange site, and all the sites transactions are random. However, the card didn't have a postage stamp. It had one of those metered stamps.

That's why I traded for this one, hoping I would get a stamp. The trade was arranged for me through a third party, and the sender lives in Chile but traveled to Cuba.  I had no idea what postcard design I was getting. As it is, it's the Museo Bellas Artes, which translates to museum of fine art.

I think that's fascinating, and I wonder how that happened. Now, you might think that it's a pre-stamped postcard, but it isn't. I received a picture of the stamped side for proof that the trade was sent. On that picture, there clearly was not a postmark. It's a mystery! 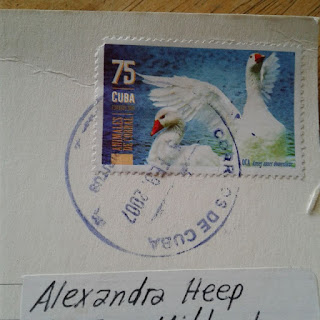