How to Collect Postcards from Every Country in the World 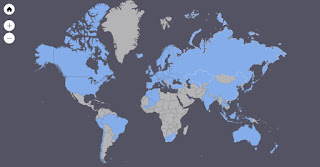 Deltiology, the official word for collecting postcards, is a hobby that doesn't take up as much space as others. I had started collecting postcards as a child and while I stopped before I was 18, I had kept them until a few years ago when I lost all of my stuff.

So, I started collecting again, tentatively, a few years ago. At first, I signed up on two postcard exchange sites: Postcrossing and Postcard United. I also tried a third site, Postcard Hub, but that didn't go so well. In May 2019, I also started trading on Facebook groups and the Postcrossing forum.

There are, at last count, just over 260 independent states. Google says the total number of countries and autonomous regions is only 197 (195 of those belong to the UN while 2 countries are UN observers).

Postcrossing counts the independent territories that aren't part of the UN and has a number of 248. Only 10 of those countries have never been registered on that site, which dates back to 2005. The site states that it uses ISO 3166. The ISO 3166 gives me the clearest list of countries that I have found:

And that gives us a total of 260 "independent states." But, not all are listed on Postcrossing either. That is still a head-scratcher for me. Autonomous is an interesting description because it translates to independent or self-governing. In that regard, there are at least 121 autonomous regions according to this site.

According to Postcrossing, a couple dozen countries have only sent a handful of cards, and some don't exist anymore. The latter, for example, applies to Yugoslavia. Approximately 209 independent states are considered active on Postcrossing, but this number fluctuates slightly as time goes on. At least one country, South Sudan, does not seem to have any mail service at all.

As mentioned, there are still some autonomous regions that aren't listed on Postcrossing. For example, the Canary Islands sort of compare to Puerto Rico. They are a part of Spain and use their postage stamps, but have their own flag. Puerto Rico is similar because it uses the United States stamps and postal system but also has its own flag. However, Puerto Rico is listed as a separate country while the Canary Islands aren't.

There are more places like that. However, you will find that every official agency insists that there are only 195 countries (event the ISO 3166). Interestingly enough, the U.S. Department of State has a list called Dependencies and Areas of Special Sovereignty. That list shows me yet more new places I had never heard of, and it lists Puerto Rico but not the Canary Islands.

So, if you already know anything about deltiology, you might say that it's impossible to collect cards from every country because:
For example, North Korea, Sudan, Syria, Iran and Cuba are sanctioned countries by the USA, so we allegedly can't send anything there. (Exceptions apply, but I don't think they include postcards).

HOWEVER, Iran is listed as an active country on the Postcrossing site, and Iranian users show cards received from the USA as of August 19, 2019. Their users also successfully sent to the USA on a regular basis. So, who knows?

Anyway, it stands to reason that restrictions can apply in reverse, not just with the aforementioned  countries but others as well. For example, I think Egypt does not allow their inhabitants to send mail to the USA. In this case, all you can do is have a postcard sent from Egypt to someone else in a neutral country that has relations with Egypt and the USA. That person can then forward the mail to you. (I received a postcard from Egypt by following this route).

I have also read that someone from Palestine who had to send to Israel as part of an exchange wrote the address correctly, but marked the country as Ireland (Palestine and Israel have no relations). So, Ireland figured out where the address was, and the postcard ended up in Israel eventually. That's a lot of effort, but it seemed to work. So, improbable - yes, impossible - no.

Regardless, I am still a long way off from having postcards from even half the countries, territories or whatever. The reason for this is that the postal exchange sites match you randomly with countries, and you get the same ones over and over because they have more users.

That's partially the reason why I started trading, on and off my favorite postcards exchange site. One thing I found missing is that I could not find any online articles that explained how you could get cards from "uncommon" countries.

What are uncommon countries for postcards? Well, there are several answers:

- Places that don't have a lot of Postcrossers.
- Locales that have political unrest, war etc.
- Countries that have severe economic disadvantages.
- Locations that have small populations.
- Remote places.

The easy answer is to find someone in a foreign place and ask to trade a postcard. The hard part is the HOW. Since the USA is not considered a rare country (it's third in line for most postcards sent in the world), it can be difficult to trade with people from other countries. Collectors who live in rarer countries are usually aware of that status and tend to be choosy.

So, you have to find something that the other user wants, even if it's not a postcard. I have found that the state quarters and $2 bills are popular in other countries. Now, sending money can be tricky and even illegal, but that is another story. You can also offer stamps, especially Europa mini sheets.

In regards to postcards, you could also offer a rare subject matter, shaped or lenticular (3D) postcards. Copper postcards (made out of that metal) work too because they are desirable. This is reflected in the price as they usually cost around $5 per card or more.

Many countries don't really have people who send cards because they can't afford it, especially in Africa. In that case, you can find someone who is traveling there and trade with that person. Plenty of people do travel to poorer places. That is how I received cards from Ghana and Togo.

In the case of places with civil unrest, you can usually find people from there in Facebook trading groups. I have found that plenty of people in these areas seem to have an interest in trades. Perhaps because it takes their mind off things? Who knows.

And then there is Antarctica, which doesn't "belong" to any country but has numerous sectors assigned to countries where they conduct research. No people live in Antarctica year-round supposedly, but they do have plenty of tourists on cruise ships who visit there, and you have the aforementioned science stations.

I actually have a postcard that is postmarked South Pole. All I had to do was join a scientist's mailing  list that was posted on Facebook in a postcard group. Keep in mind that Antarctica has summer when the northern hemisphere has winter, and during Antarctica's wintertime no mail goes out because of the brutal weather.

Trading does take time because there is more involved than just finding people. You have to deal with communicative and cultural differences, and they're often in different time zones. Many traders also rely on the computer translator because they don't speak English.

Don't forget: There is always the postal factor. While the U.S. has a fairly reliable mail system, things can still get lost. Also, it can take months before mail even leaves the country of origin. How then do you know if someone really mailed your postcard? That is easy: You always ask for (and send) photo proof.

Ah, but there is more. There are a couple of additional methods you can use to get a postcard from a rare country:

These options can be difficult to locate, but it's worth to use online searches. You can also ask other collectors. In a nutshell, deltiology, for me, started out because of an interest in geography. It has evolved though into something more because now I am learning about a whole other world: that of political, social and economical challenges.
Posted by Alexandra Heep at 1:05 AM