How to Get a Postcard from North Korea 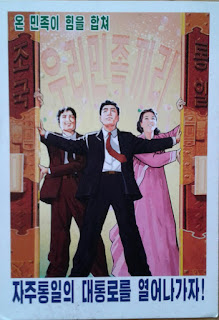 A few days ago, I received a postcard from North Korea. I shared it on Facebook, and it garnered some attention. So, I thought I would create a blog post to explain the behind-the-scenes stuff.

Since I collect postcards, this was quite an addition to my collection. To save space, I focus my collection mainly on getting at least one card from every country in the world. (I do have others, but that is explained in another post).

Anyway, I arranged this trade through a person from China. He did not go to North Korea, but he has a friend who goes there every few months. He occasionally puts up posts asking for certain postcards in turn.

As you might expect, usually he asks for postcards sent from rare places. What is a rare place? Well, any country, nation or independent territory that doesn't send a lot of postcards. Obviously, the USA is not a rare country. Upon a whim, I offered a copper postcard from Illinois (the state in which I live) with a hand cancellation (this means not sent through the USPS machines), and he accepted.

In the postcard world, copper postcards are considered special. I don't use them a lot (I have only sent two) because they are smaller than regular size, not cheap and they are vintage. They can also get caught in postal machines or get lost because of the small size. Only some people like them, so I lucked out.

So, to get a postcard from North Korea is not that difficult. You just need to find a person from China who goes there occasionally and have something to trade that he or she wants.

Anyway, delivery does take a while, and the success rate fluctuates. Many cards sent from there disappear. Also, every postcard gets read by Korean officials before it goes on its way. Some come heavily censored. This one was mailed in August, and, as you can see, the postmark was dated in October. So, the whole transaction took about four months. 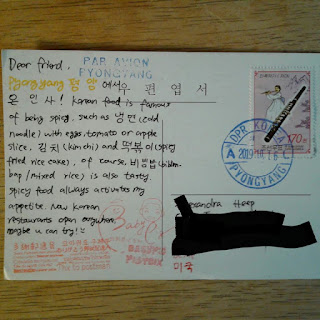 Posted by Alexandra Heep at 7:40 PM

That is very cool. I've saved a lot of postcards over the years--none quite like NK--but still it's neat to have the cards. Interesting story on your aquisition.