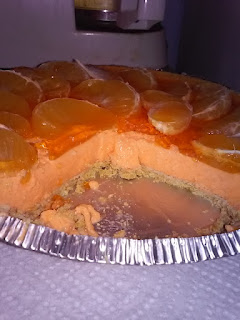 Sometimes one idea and implementation of such starts a whole chain of events. Such is the case with a recent creation that came out of my trailer park kitchen.

With work slow, I decided to do some baking (and no-baking) this week for Christmas. I slacked off in that department the last few years because we needed to focus on bringing in every dollar that we could, just to fall short anyway. This year, I decided to start worrying about that after Christmas. But, to use a tired, old phrase, I digress.

Part of my no-baking adventures was a blender cheesecake recipe from Rachel Ray I have been meaning to try for years. Since it's a recipe by Rachel Ray, I can't type it up exactly because that would be plagiarism (can't find a link to link to, I wrote this down by hand many years ago when I watched her cooking show).

Now, I had sour cream on hand already and we aren't fans of cottage cheese, so I used that instead with two tablespoons of creme fraiche (which I had on hand as well). I also halfed the recipe because I only wanted one cheesecake since it's only the two of  us.

Also, I wanted to make it more Christmasy. So, I used clementine oranges.

In a nutshell, here is my altered recipe:

Put sour cream and creme fraiche in blender. Make one box of the gelatin using half a cup of hot and half a cup of cold water. At once, before it gels, add to sour cream mixture. Blend until smooth. Pour into pie crust. Refrigerate until set, and place clementine slices on top.

Make the remaining box of gelatin per instructions on box. Once cooled off, but before it starts to gel, pour a little bit on top of fruit and put in refrigerator until set. Okay, this is when it gets tricky. I'm not sure if it's because I used oranges instead of strawberries, but this was messy. The original recipe says to use the one box of gelatin for both pies. So, one would reason that half of the box would top one pie. Wrong. I only could use a little bit because it started spilling over and was left with a lot of leftover gelatin.

Here is my tip: I guess you won't need the gelatin for the top (unless you use strawberries, I guess), but: If you do, place the pie inside of a frying pan and voila, you have a catch tray, just in case (see pic below). Put the whole thing into the fridge, with the frying pan lid of course, chill until set, and remove the pie when it's done. 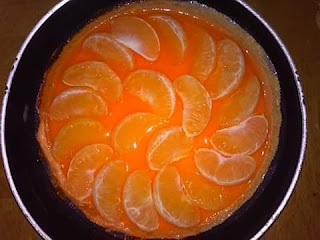 Now, this brings me to a question that was asked once I posted pics of the cheesecake on Facebook: What do oranges have to do with Christmas? Well, I did this as an homage to my mother and childhood. Most of which I prefer not to recall, but time does heal and I start to remember the few good things that happened. One of the good memories involves the celebration of St. Nicklaus Day in Germany when kids put out shoes (or boots) and "St. Nicklaus" fills them with goodies.

Nowadays kids get electronics, clothes and whatnot for that day (how that relates to fitting in a boot, shoe or stocking is beyond me), but back then the goodies consisted of walnuts, clementines and chocolate-covered gold coins. (The latter is popular for Hanukkah and also known as Gelt.) However, using oranges as stuffers isn't just a German (or European) thing. Oranges are actually traditional stocking stuffers in the U.S.  If you want an overview of what oranges have to do with all that, check out this article that I found online. You can thank me later for this historic, cultural and culinary lesson. :-)

One last note: This will taste more like a custard or cream pie. So, if you are looking for a New York-kind of cheesecake taste, fogeddaboutit.
Posted by Alexandra Heep at 4:12 PM