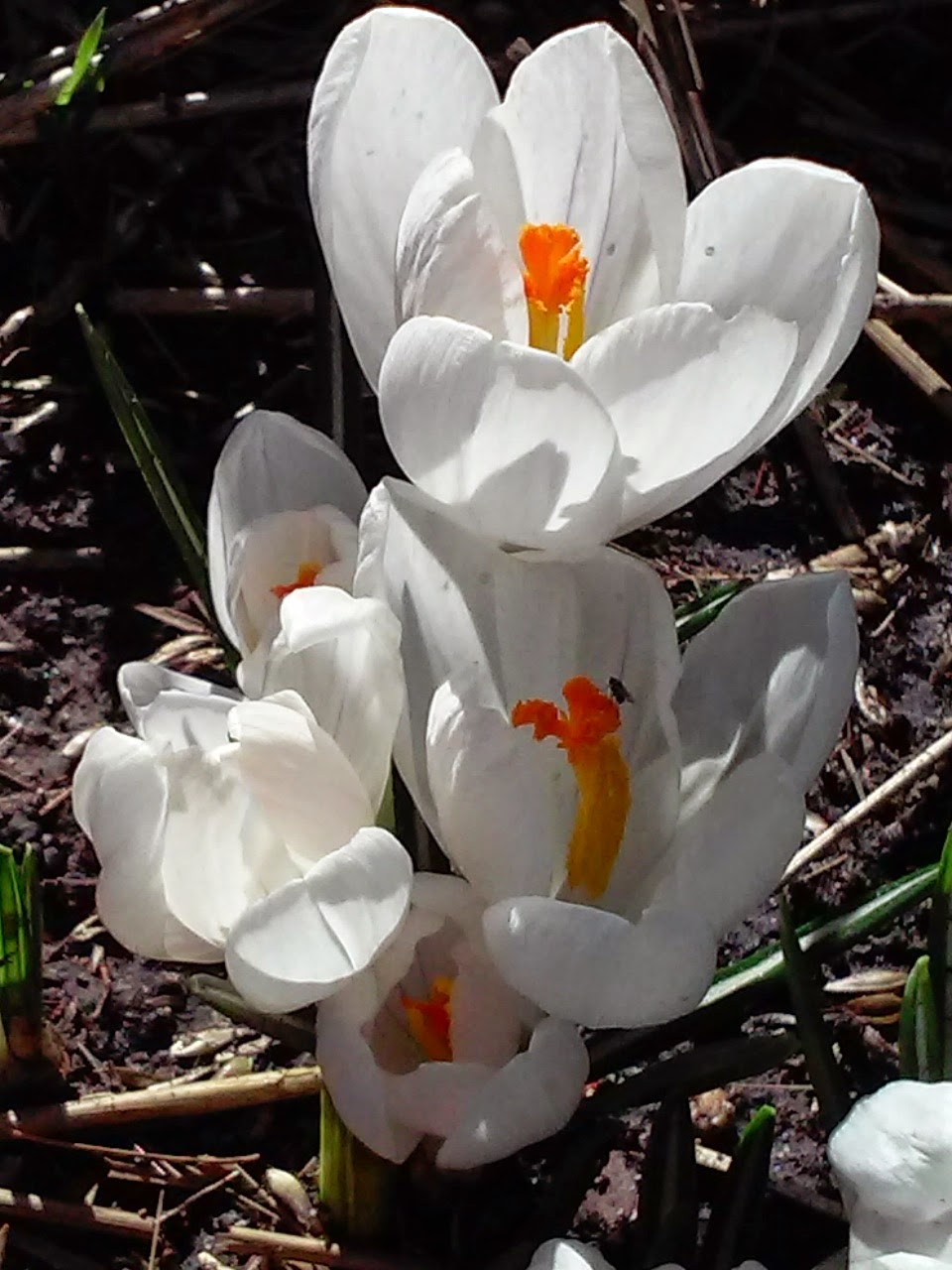 Some of you might know that I used to blog about our gardening adventures on another site. Well, I don't write on that site anymore, so this is what you get. Plus, in the Chicago area we have been on a six month gardening hiatus. However, we are finally back in business. That is right, we've been out in the garden recently.

So, in the flower garden we removed some mulch a few weeks back, and the snowdrops came up around the end of March, but are already done because it got too warm. Some of the crocus are in bloom now, with others lagging behind. For some reason the yellow ones are being eaten though.

Also, about half of the crocuses are lagging behind. I can see the sprouts, but no blooms. Just about all the spring bulbs have sprouted, except for hiacynth that I planted last fall. Perhaps they only seem late in coming up because the other spring bulbs are in their second year already. We'll see. I did see a few new sprouts today that could be said hyacinths.

I also forgot that I had planted some more daffodils last year in the back, so they are coming up. We had daffodils in the front part of the garden (shorter varieties) already, but I must have picked up some taller varieties last fall. Well, we will see. I have no idea what color combo they are, so that will be a nice surprise.

We were also given a bunch of white iris divisions last year by one of the property management employees. They were digging them out and were going to throw them out, but she knows I love to garden so gave them to me. She also gave me a Painted Lady. We were concerned about that one because it got ripped out in the middle of its blooming cycle. Well, all the white irises sprouts are up and a bunch of sprouts are showing where the Painted Lady was planted. I know it's no guarantee they will bloom this year, but at least they are alive.

I am also pleasantly surprised to see that the mums we planted last August are actually coming back. The thing with "hardy" mums is that most people (including myself) do it wrong. Technically, they are supposed to be planted in the spring, not in the fall, if you want them to come back the next year.

Well, I did not abide by that. Why? Because we have two flower beds in front of the trailer that face the streets. I usually put sunflowers there, but of course by end of August at the last they are done. Since mums are the only thing you can get at that time, that is what I got. I did not think they had enough time to establish themselves, especially with the super cold February we have had, but I guess the large amount of snow that covered them helped.

And to think, we almost ripped them out. They were a dry mess a few weeks ago and I gave Tom the green light to rip them out. Alas, I am glad he did not because he noticed new growth. So, I trimmed all the dead stuff off and we'll see how it goes. I will still put sunflowers in that bed, they'll just fill in the spaces.

Today I planted some summer bulbs (litaris blazing star). We also did some work in the veggie plot, but that will be a different post.
Posted by Alexandra Heep at 12:19 AM

Email ThisBlogThis!Share to TwitterShare to FacebookShare to Pinterest
Labels: Gardening