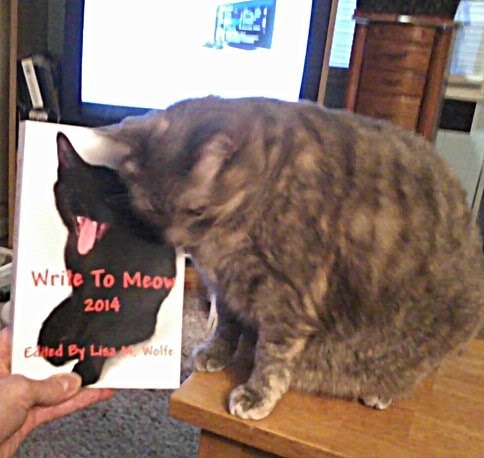 My regular readers know that Princess Gracie, our cat, is a big part of my life. As any pet should be. She has also garnered some accolades along the line. She was mentioned on the local news in Virginia, she appears in a Denny Hamlin (Nascar driver) video and she "wrote" a blog for the official Brad Keselowski Nascar website.

Now she also appears in a book. Her picture is used in the Write to Meow 2014 Anthology. I submitted three cat poems for that book and they were, of course, all inspired by her. One of them was written for her especially: A Stretch and A Purr. I wrote this poem during a particularly challenging time. She was sunning herself on the window sill in a hotel room that functioned as our home at the time, and I needed to capture that particular moment so it would bring me, and others, joy in years to come.

You can order the Write to Meow 2014 Anthology on Amazon.

All proceeds will benefit the Almost Home Animal Shelter, a no-kill facility.
Posted by Alexandra Heep at 7:51 PM