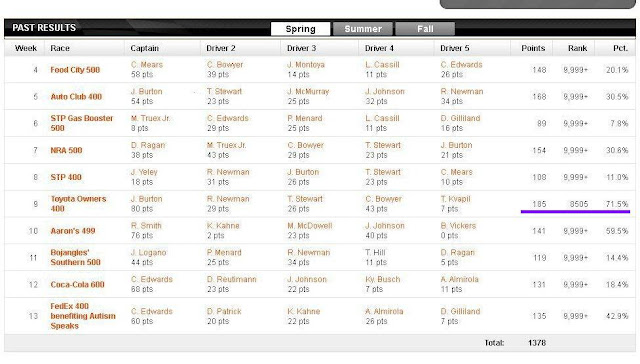 As promised, here are the results of the first 10 rounds for the NASCAR fantasy league on Fox. If you missed what led up to this, this post explains it.

First is Gracie's score sheet for her Team Threeeee. Note that there are 13 numbered races on the score sheet, but it starts with race 4, not race 1. That is because I did not have the idea for her to make picks until race 4 of the season. What is a good score for a race? Anything over 200 is pretty darn good, and over 150 is okay, in my opinion.

Now note race 9, the results underlined in purple: She placed in the 71.5 percentile of all NASCAR on Fox players and as you can see, her score of 185 for that race ranked her 8,505 from all players. How many total players were there? It's hard to tell. I've done some math by taking in consideration how many players appear in the individual leagues and I would say it's several tens of thousands at least. Not bad for random picks! See also that she scored once over 50 % and even her lowest was not lower than 7.8 percent. As you will see shortly, even I managed worse! 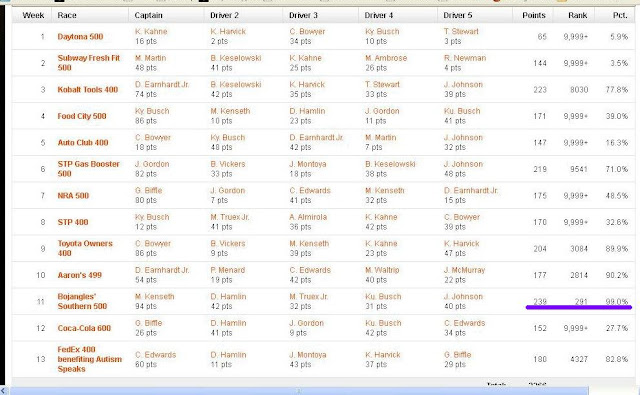 Here is my overview for the spring segment for Team Bloomin39. Note that for race 11 I placed in the 99 percentile with a score of 239 and placed 291 out of tens of thousands of players. I also scored over 200 points three times. Now note how I started off the season ... with dismal percentiles of 5.9 and 3.5. Even the cat never did this badly!

For random scores, she was rather consistent. I guess Gracie played it safe.