Human Versus Cat Round 11 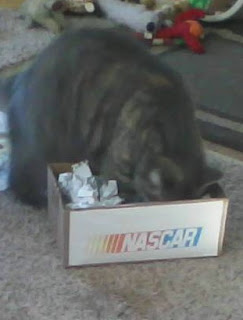 With the spring segment behind us, Gracie and I will now be on even pawing, err footing, when it comes to playing the NASCAR fantasy league on Fox. Why? Because she did not play the first three races of the spring segment because I had not thought of this crazy idea. If you want to know how all this started, this post explains it. 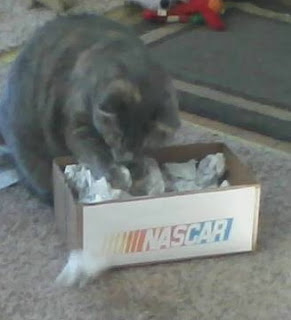 Anyway, race 1 (but round 11 for us) of the summer segment for the NASCAR on Fox fantasy league was Pocono. All of Friday's track action (rounds of practice and qualifying) was washed out, thanks to Tropical Storm Andrea, yet Gracie still made her picks enthusiastically.

That is an impressive list of picks. See, while only 43 drivers race, there are many more numbers of drivers out there in the box. I made it fair and we tossed in all the numbers of drivers who only make a few races, or start and park. So far, she has managed not to pick too many of those. On the rare occasion she happens to pick a number of a racer not in the race, we let her pick again.

Mine were not so easy to made because I often base my picks on what happened during practice and qualifying. I almost felt like digging randomly in the box. I did not, of course because that is Gracie's box. Here is what I came up with:

Gracie almost got me. However, on the last lap Paul Menard blew a tire and instead of finishing top 10, finished 30th, or she would have outscored me.

My results were pretty dismal thanks to Kasey Kahne having mechanical trouble. It's never a good sign when one of your drivers pulls off the track during lap 2. I scored 16 for him, 27 for Edwards, 41 for Earnhardt Jr., 42 for Biffle and 35 for Harvick for a total of 161 points. I dropped quite a bit to the 68.1 percentile for all NASCAR on Fox players and rank 144 out of 409 for the Ryan Newman league.

Posted by Alexandra Heep at 9:50 PM