Human Versus Cat Round 3 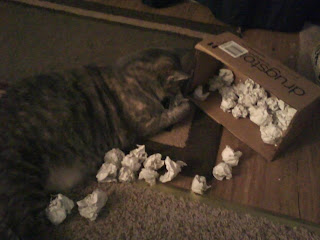 As you can see above, Gracie really got into making her picks for the Martinsville Nascar race. (If you don't know what I am talking about, read this post). Here they are:

Here are my picks:

She scored 8, 29, 25, 11, and 16 respectively for a total of 89 points. Poor kitty. She would have done better, but her team captain, Martin Truex, finished third-last. Carl Edwards came in 9th and Paul Menard 16th. All three drivers were not bad choices, they just had some bad luck.

She is ranked 1025 out of 1141 for her individual league (fans of Brad Keselowski) and at a 10.4 percentile. As I say every week: Remember that she missed the first two races (because I did not think to have her play until the third race), so the stats are skewed.

Since Gracie won round two and I won round one, the score is now 2:1 for me. How will next week turn out? Stay tuned!
Posted by Alexandra Heep at 6:35 PM

Glad you're staying ahead of your cat!

Is it possible that Gracie is giving you a head start?