In Memory of Chelsea 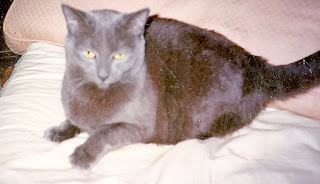 
I was determined to finish NaBloWriMo without any rants, negativity, or deeply personal stuff. That all went out the window a few hours ago when my friend Janet’s cat, Chelsea, died. No, I never met Chelsea or Janet for that matter. See, we’re “only” Facebook friends. But, we have found out so many things in common that we refer to each other as doppelgangers. Technology is supposed to be impersonal, but I found it has increased my friendship and support circle.

Yes, I am a strange person. I do not cry when people die, but when I found out about Chelsea passing (or other animal friends), I felt devastated and ill. Also, the death of animals hits me harder than the death of humans because I do not know what happens after. I have faith about where people go, but what about animals? It’s a question I ask myself every time a pet or animal departs.

It’s a discussion we had at first with my daughter when a horse she was riding died. While she had formed a bond with the horse, she was afraid that since the horse did not “belong” to her she would not recognize her in prayers. She also asked if animals had souls and if wild animals, since they could be “vicious,” were different from pets and lacked souls.

I am not sure what all we came up with, but I told her animals do not belong to us in the first place, so that part did not matter. Also, I said that the more we care for an animal, the more its souls grows. That means, yes, wild animals can have them if we treat them with respect, but that all is energy and in the end returns to the same place.

However, while all this soothed her in time, my belief system gets tested at times like these. I do know that the earth and its creatures are not for us to keep, only on loan, but losses of loved ones take a while to heal regardless. Is there an animal heaven?
Posted by Alexandra Heep at 12:00 AM

Email ThisBlogThis!Share to TwitterShare to FacebookShare to Pinterest
Labels: For Cat Lovers, Thoughts