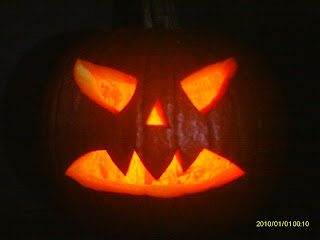 
Since it’s the day before Halloween (does that make it Halloween Eve or All Hallow’s Eve Eve?), I figured I’d share my story of how I once won a Pumpkin carving contest, as part of a group.

I used to work in the post-closing division for a Mortgage Bank and as such, we did not have a whole lot of fun, since we dealt with investors in the secondary market. This was in the 1990s when all went crazy with people buying and there was lots of work. In 2001, among all the upheaval of work and post-September 11, management decided that we needed a diversion and created the pumpkin carving contest.

We were all assigned random team mates by management and the carving took place in a meeting room. We were not seperated, we all saw what the others were doing. My group carved a patriotic USA pumpkin, but it did not win. I can’t remember exactly what the voting criteria were, aside from all pumpkins being displayed in a lobby for a few days after judgement, but I remember we were left with a taste of favoritism and unfairness in our mouths. It seemed that even during a contest that was supposed to be fun, corporate rules, well, ruled.

The following year, we went through a merger and personnel changes that stressed everyone to the max. As part of the personnel changes, we had this crazy manager who did not quite seem to fit in. She always wore super casual clothes, had unkempt hair, a sense of humor, and she was very young. For some reason, while I never was one to be teacher’s pet, in the clique, or otherwise favored, she took a liking to me.

To my surprise, they announced the pumpkin contest again. I can’t remember how, but my manager and I came up with this crazy plan of creating a pumpkin doll in the image of our new female Vice President we had acquired with the merger. This lady was the total opposite of my manager: She wore plaid every day, had glasses, and a super-outdated hairstyle. While this VP could not have been that much older than me, she was totally conservative, bordering on old-fashioned. Think old librarian. We never saw her in slacks either.

It was one week before the contest. My manager manipulated the team (behind closed doors of course) by choosing her four favorite employees, myself among them. We held a “meeting” and created a game plan. Since the pumpkins provided were all huge, my manager said she would get us a mini-pumpkin that would be the head, and we would draw a face on.

One of my colleagues said she had a doll outfit with a plaid skirt, the other employee was in charge of buying the glasses and the cotton batting for the body. What was my part in this? To steal the name plate out of the VP’s office on the day of the contest, just before the finished products were to go up in the lobby for display and judging.

On the day of the pumpkin carving contest, as my group entered the meeting room with a small pumpkin head with a face drawn on in black marker, people knew something was not right. Here they had to work with random team mates and large pumpkins they actually had to carve, while it was obvious we, who all worked in the same department, were doing something else that was not in the (unwritten) rule book.

People still did not quite get it, until I excused myself. My manager called the VP’s office to get her out of it on some pretense, while I snuck in and stole the name plate. Once I came back into the meeting room with the name plate, people got it. Needless to say, it did not make us more popular.
Well, we displayed our creations in the lobby and nervously awaited the VPs reaction. Plus, all the other senior staff was there of course, as were the judges, and by then it sunk in we could all be without jobs. Well, whether the VP put on an act or not, she laughed and our scary Halloween VP doll with the metal rim glasses and plaid skirt, set up behind the huge, golden name plate that left no doubt as to what or who this was, won unanimously. What did we sell our souls for that day? Four hours of paid vacation.

The moral of the story is:
- In the business world, you can’t win if you play fair.
- Fame is fleeting, as said manager had to lay me off the next year.