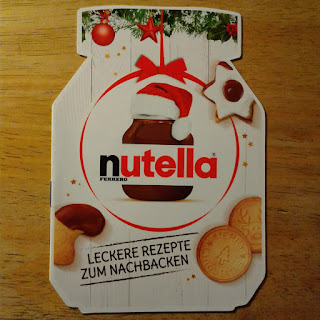 Nutella is one food that I didn't have to give up when I moved from Germany to the United States. Okay, so I had to wait a few years because where I lived at first they didn't have it right away. I did find it in Canada, so whenever I had the chance, I would get some. By the 1990s, I could find Nutella in a few supermarkets. Now you can find it in many places in the USA.

If you don't know what Nutella is, it's a chocolate hazelnut spread. It does have a lot of sugar and it is a processed food, so I don't eat a lot of it. It takes me about 4 months to go through a jar, and I often have to throw out a partial jar because I am not sure how long it lasts.

My favorite way to eat it is on a piece of rye bread. I have had it on French toast, waffles, crepes. I have also had a Nutella milkshake. There's even a World Nutella Day on February 5. Have you ever had Nutella?

I am not very fond of Nutella. It is too sweet. My son loves it with waffles and shake. The Nutella bottle gets over in no time in my house.

I have NEVER tried it, but my daughter-in-law LOVES it! I guess I ought to try it just to say I know what it tastes like, but I imagine, not liking chocolate much, That I would not care for it.