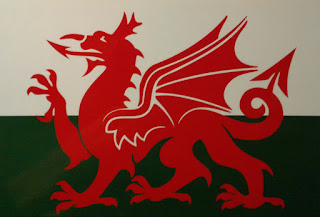 This post should actually be named "F for Fail" because I had this cool, unusual country that starts with an F picked out for this topic. I had made a private swap for it and the card was sent to me on March 5, so I thought it would be here in time by now. Alas, it wasn't to be.

I didn't want to do France or Finland because these aren't unusual countries. So, let's have fun with flags instead. Why flags? Well, flags are actually a popular theme in postcard collector circles. I do send out the occasional flag postcard. However, when I do, it's not a card with the Stars and Stripes. I think that the U.S.A. probably has one of the most recognizable flags in the world, plus I figure that that's a card they can easily get.

Instead, I send out cards with an illustration of the Chicago flag. According to a survey conducted in 2004 by the North American Vexillological Association (who know there was such a thing?), the Chicago flag ranks second only behind the Washington D.C. flag in popularity. Strangely enough, the most famous American city, New York, did not make the top 10.

Did you know that not every U.S. city has a flag? I am lucky I live near a city that has one. For example, Michigan only has one city that has a flag, but Indiana has five cities that have flags. In this case, size doesn't matter whether a city has a flag or not. A quick online search revealed that the suburb in which I live, Des Plaines (with a population of just under 60,000), actually has a flag.

Strangely enough, I only have two flag cards (other than the Chicago ones that I mail out), and both were gifts by pen pals. Both of them are country flag postcards One of them is of the Union Jack, and the other is the one you see above. Can you guess what country it is?