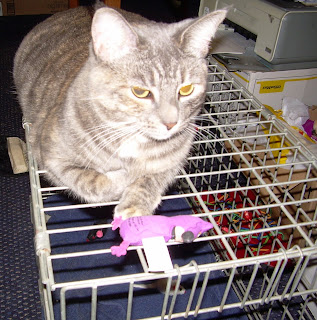 Gracie loves to play. Don’t all cats play? Not really. If you have ever had one you know that cats have many different personalities, just like other animals and humans. I have had some cats that rivaled Garfield’s amount of laziness.

The amazing thing about Gracie is that she seems to adjust her games. When we still lived in a large triplex with hardwood floors, she played fetch. I would throw a fuzzy toy mouse, and she would skid along the floor, stopping short of the door, then she would bring the mouse back to me to throw it again. She always preferred gray mice over white and black. She also likes the ones that have a little rattle inside, so when she shakes them, they sound alive I guess.

Well, when we moved into the hotel, I was concerned because she did not play at first. When I threw the mouse, she just looked at me as if to say: “You get it!” Eventually, when she thought I was too busy to notice I guess, she would throw the mouse up in the air once in a while. From there, she at least would chase the mouse again, but when I tried her to get to bring it back to me, she would not. I guess only ten feet of available space made that game uninteresting.

Then I had an epiphany of throwing the mouse high instead of far, and that did the trick. Gracie became quite adept at snatching the mouse out of the air, batting it hard to the floor, sometimes even doing back flips to do so, and giving it a bite and shake for good measure. From there, the game evolved into a kitty basketball version where she tried to knock the mouse into the small waste basket, or her food dish.

The latest game is one that Garfield himself would approve of: Gracie sits on top of her metal carrier (no, she does not live in it, it's used for transport only) and pushes a purple toy through the bars. I have to retrieve it from inside the cage, put it in front of her, and she will push it back through. If she feels energetic, she will swipe it off to the side to send it flying.

I wonder what she will come up with next?
Posted by Alexandra Heep at 12:06 AM

That is funny! Good cat who can un-bored herself are hard to come by...I think. ;-)

They're such entertainment, aren't they. But why is Gracie sitting on a cage?

she was telling you and you finally listened

Now Alex. I think you are missing an opportunity here. Any cat that can habitually put a mouse into a cage is capable of making you some money on the side. I once knew a fellow who had a side job when he was in college. He worked for a washing machine company and his job was placing a small box of Tide in each washing machine. I think Gracie could be trained to do Tide instead of the mouse - into a washing machine instead of a cage. This could easily increase your income by 25% minus, of course, his lunch money each day. Give it some thought!