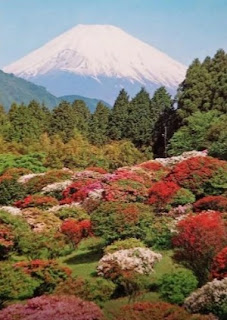 Japan is one of four countries that start with J. The others are Jamaica, Jersey and Jordan. I had a pen pal in Jersey but no postcard from there. I was supposed to have a postcard of Jordan, but I have no idea where it went. It's currently still missing in the mail and has been for a long time.

While I try to blog about places that don't seem common, all I have for J is Japan, so here we are. Did you know that Japan has one of the lowest crime rates in the world? The peace index ranks it ninth-safest overall. The country's highest point is Mount Fuji. Luckily, I received this postcard of Mount Fuji a while back.

As it is, this postcard of Mount Fuji is probably my favorite one. It's not that I am a fan of major tourist attractions, but I love the whole picture of trees and flowers with majestic Mount Fuji, looking like it's dusted with powdered sugar, in the background. It's a fantastic scene in which I would love to climb!

As you can see, Japanese stamps say "Nippon" on it. That's because nippon means sun origin. As you probably know, the Japanese flag has the sun on it. The flag design is called hinomaru, which translates to circle of the sun. 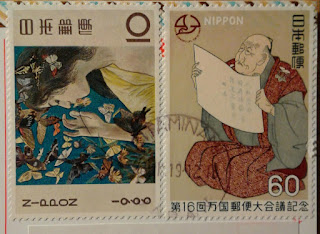 I also chose Japan for my J post. Love the Mount Fuji postcard.

This postcard is gorgeous as are the stamps.

Finally someplace I've been. I love Japan, and your postcard and stamps bring back sweet, sweet memories.

Great to read about Japan. Guess what I just googled the countries that start with J and its the 4 countries that you have listed in this post. Very well written. Happy Easter and Stay safe.

Thank you for the twitter message. Yes. The picture of Mount Fuji is very good. I visited Tokyo long back.

I request all A to Z bloggers to focus on sharing posts on Twitter, FaceBook and other platforms. We need to promote posts after writing them. Best wishes.