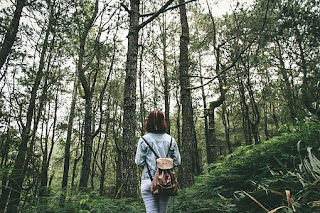 Wanderlust is a German word that has made it into the English language. If you type wander and lust into the Google translator, it comes out migratory lust. Well, I am German, so let me tell you that dictionaries often don't get it right, especially when it comes to compound words.

Wanderlust refers to a feeling that people get when they don't want to be where they are at the moment. However, it doesn't really imply traveling either. Many people travel, but then they come back home, wherever home might be. To me, wanderlust is more the word for people who might pause for a while before moving on. My translation is "a desire to meander."

I was born with wanderlust. I tried counting in how many places I have lived, but I forgot many of them. I would say about 30 (and I am 51 years old). My parents didn't stay still in one place either. When I moved into my own place at age 17, I had already changed address six times.

Strangely enough, where I live now is the one place I have stayed at the longest. Tom is the opposite of me. He has never lived anywhere but in a 25-mile radius of where he was born. He has taken me many times around the neighborhood in which he grew up, just a few minutes from here.

I love this sense of home, but I don't understand it. Actually, just about everything I have I don't own. I "own" only a few things, and they probably could fit into two suitcases. Everything usually ends up left behind. I think that a person with wanderlust doesn't attach to things the way other people do, or they were forced to give up things many times over.

While I have often wondered what it would feel like to have a normal sense of belonging, we are what we are. And yes, I still want to go to other places and see what is out there, but I am happy in the moment.
Posted by Alexandra Heep at 1:30 AM

I would say I never had wanderlust. I hate change and would very much dislike having to move out of my home...although I get hints from Tommy that is exactly what he wants. Yikes!

I tend to meander in more ways than one. I love to wander, but I also like to have a home to come back to for a while now and then.