Blogging from A to Z 2018: J is for Jerusalem's Western Wall 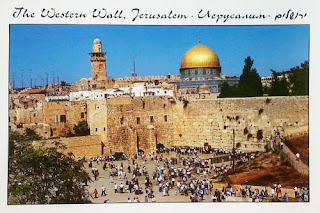 Postcards are exciting for different reasons. They can show interesting places, they can come with nice stamps, they can show favorite subject matter (in my case, the three front runners are cats, cacti and sunflowers). Or, they can include fantastic insight about the sender/subject matter in the written section on the backside.

This card from Israel has all of the above. My favorite part is that the sender took some time to give a cultural insight that you can't get anywhere else, except from a person who lives the life in the place of origin. Here is what the sender wrote, ad verbatim: (Yes, I am also amazed how he fit all that on the card, plus there is a personal intro about him that I omitted for privacy sake).

"The large, round structure in the center is somewhat iconic of the city and is known as the Dome of the Rock. According to legend, when God was creating the universe, he used a large rock as a cornerstone. That same rock lies in the foundation of the Dome, and visitors can see it for themselves, after descending to the basement.

This magnificent building is located on top of the Temple Mount in the old city of Jerusalem. In ancient times, the small mount was the basis of the large Jewish Temple, but it was destroyed by the Romans 2000 years ago. Since then, it changed hands several times, and now is predominantly Muslim

There are some Jewish extremists who are thinking about taking it over, However, at present, this is definitely not happening. A delicate balance is maintained for the benefit of all."

Okay, so the politically and historically savvy know most of this already, but I think the last sentence says so much, imo. The card was written in October 2017, and circumstances are always changing, but it speaks of hope. In the end, it also gives a glimpse about how one tip of the scales, one way or the other, can affect humans' lives who want nothing more than to just go about their business in peace.

Nice to get a card from a holy place like Jerusalem.
(My next post - Judge me, but judge me right - http://bit.ly/TT_judge)