A to Z Blogging Challenge 2018: X is for Xtra-Large Postcards 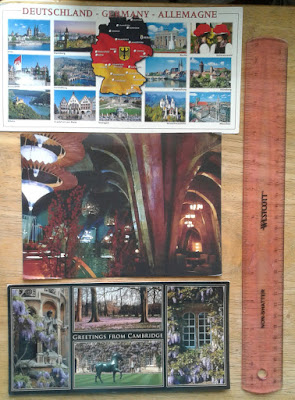 Okay, so the title exhibits bad grammar, but the letter x is always a challenge.

Many people who collect postcards seem to shy away from larger than normal postcards. Most likely, because they are challenging to store. I love big postcards because they are unusual. What is normal, anyway? Generally, 6 x 4 inches, 15 x 10 cm (or a bit less). It depends on the country.

For the USA, it's technically 6 x 4.25 inches because anything over that costs more to mail within the country than standard postcard rate. The beauty is that the postage is the same for an extra-large postcard and a regular sized one when mailing internationally.

On the picture above, you can see some of the largest postcards I have received. The first one on top that depicts scenes from Germany was sent from within the USA, I won it in a Facebook postcard group. It measures about 4.25 x 8.5 inches (approximately 11 x 21.5 cm).

The one in the middle was sent from Taiwan via Postcard United (a postcard exchange site). I have no idea what it depicts because the backside is in Mandarin, and the user did not describe the card in her message. It measures about 5.15 x 7 inches (approximately 13 x 18 cm).

The third one arrived from the country of origin (England). It's was sent via Postcrossing (the largest postcard exchange site in the world). I received it right after I started collecting postcards. It measures about 3.75 x 7.75 inches (approximately 10 x 20 cm).