A to Z Blogging Challenge 2018: V is for Virginia City's Annual Camel Race 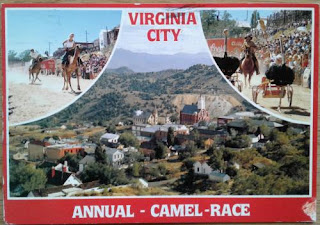 When I received this card, I first thought it was from Virginia. Well, it's actually from Virginia City, Nevada. While the origin of this card isn't necessarily that exotic, I've included it because of the subject matter.

I was curious and checked this out online, and this is what I found: The annual camel race started over 50 years ago. It was actually born out of a hoax when an editor of a local newspaper printed a story about the camel race. The San Francisco Chronicle picked up the story and printed it, not knowing it was a hoax. The people from said chronicle were not amused, once they found out the truth.

The following year (1959), the local editor printed the story again. The San Francisco Chronicle people turned the tables and showed up with camels. They soon were joined by other contestants, and there you have it. The event now must be a big deal because it has postcards.

Oh, and if you're wondering: why camels? They were used as service animals in the local gold mines in the 1800s.

That's an amusing oddity all based on a hoax.

How interesting to know the story behind this. I lived a few years in Alice Springs (Australian Northern Territory) and they have annual camel races there. Being in the desert, the camels were early pack animals for explorers. Now, many are wild in the desert there.