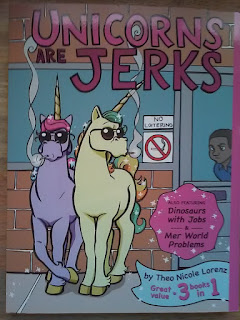 Includes: Dinosaurs with Jobs and Mer World Problems. Unicorns are Jerks has been available for several years, since 2012, but this 3-in-1 issue will be released October 1, and you can pre-order it on Amazon.

If you've seen the book Unicorns are Jerks and read the online reviews, you probably noticed that a lot of the reviewers run with the humorous theme of the book but don't really tell you much about whether you would enjoy it or not, unless you speak some fashionably geeky insider code or have an existing relationship with a unicorn jerk. Of course, if that applies to you, then you already know this book is for you. While this book includes two others that were released separately on prior dates, they all run with the same type of theme. If you're not familiar with the book, unicorn jerks et al, here's the mundane scoop on this release for those whose inquiring minds want to know.

I've seen many colorists complain that there aren't any books out there that appeal to both genders, or that everything is the same: flowers, mandalas, landscapes, worn-out fantasy themes and all-around cute, girlie stuff. Or, the other extreme: stuff that's not fuzzy, but too extreme and graphic. Your answer to this dilemma is called Unicorns are Jerks, Dinosaurs with Jobs, and Mer World Problems.

This coloring book is definitely different. The drawings for each of the three segments are like cartoons, depicting fantasy characters in plausible situations, and each one has a humorous caption. These run the gamut from sarcasm, juvenile, screwball, parodic, satirical, dry and sardonic. The book has no coarse language, so it's okay to leave around the house if you have children. (Unless you object to a bit of bathroom humor).

The book has 126 pages that seem like your typical Create Space paper, and the designs are one-sided. Still, as usual put a piece of paper behind the picture if you color with markers. The designs are suitable for any skill level and since they are cartoon-style drawings, they are ideal for those who feel anxious about trying to color "realistic" pictures perfectly. You simply can't color the designs "wrongly."

Don't let the term "cartoon-style" fool you though. The quality of the drawings certainly speak of the creator's art skills. While the three individual books that were compiled into this issue have different main characters (unicorns, dinosaurs, and merfolk, obviously), they're done in the same style.

Beneath all the humor and the carefree drawing style, though, lies a kernel of truth, and that's what the book, to me, is really about: stress-relieving therapy to deal with true life situations that one might encounter on any given day (in the case of Unicorns are Jerks), and trying to make sense of the mundane by making it fantastic (in the case of Dinosaurs with Jobs and Mer World Problems). 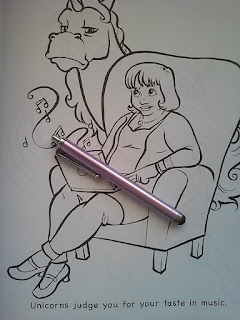 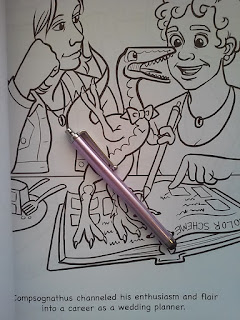 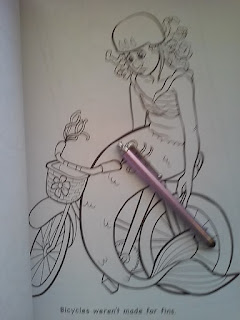 Posted by Alexandra Heep at 2:42 PM