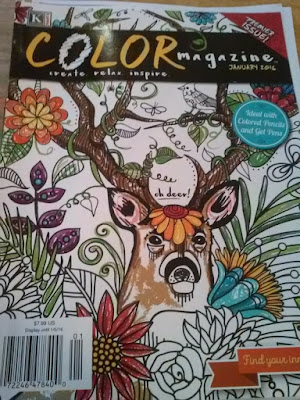 I heard from other colorists that the March edition of this coloring magazine is already out, so reviewing the January edition, which I picked up last November, might seem a moot point. However, before you rush out to find any of these magazine issues, read this first because you might decide not to go through with your purchase. (I picked this one up at a grocery chain store).

Okay, so this isn't technically an adult coloring book, but I guess it can find under that umbrella term. It's a magazine, which means it has thinner pages. Although, I have seen books marked as books that should really be magazines. Anyway, at least they got that right.

However, in my opinion, they didn't get much other stuff right. For example, I noticed, sadly at home and not in the store before buying it, that some of the designs have design flaws. Now, I have noticed flaws in other books too, but they were tiny and could be fixed. These are almost impossible to fix.

For example, there is an owl picture that has a big, random arrow in the design and some geometric shapes that don't seem to fit. Also, on the sunflower picture, the lines that split the petals radiate several inches outward, past the petals, on many of the flowers. I still colored it because it was the only sunflower picture in there and sunflowers are my favorite.

I have included both pics below (they are the only ones I completed from this magazine. What are the chances that the two designs I picked have issues, and what else is lurking? Hhm). Unfortunately, I didn't take a "before" pic, but I asked around in a coloring group and the flaw seems to be in all the prints of that magazine, not just mine, because the colorist found the same mistakes in her copy. I also did not keep the receipt, or I would contact the publisher of the magazine to get my money back.

It's kind of sad really, because a lot of the designs in the magazine are quite charming. While they are one-sided (a big plus), the design runs too far to the edge of the spine though, so if you want to remove the paper (which isn't perforated), you end up ripping it. I took the book to the local Office Max to get it spiral bound, but they told me they couldn't do it without ruining the pics because of that fact.

Why not just leave it all alone? I can't color within a book, I have to have the page out. It's just a personal preference, but I know many colorists who aren't bothered by that, while still  many others are like me and need the pages removed. Why did I buy the magazine then? Because the designs were good and I thought I could cut the pages out easier. Lesson learned!

Anyway, having $7.98 invested in this, I took the binding off myself and separated all pages. While being careful, I still ended up ripping a couple, including one of my favorites. I will color some more in the future and see if there are more pics with design flaws. Why did I not look already? Oh, I did, but without intensely poring over each of the 40-plus designs, you won't notice every tiny detail. 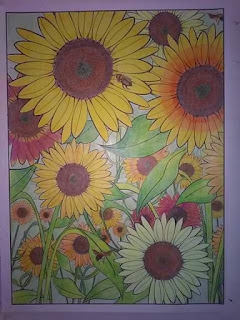 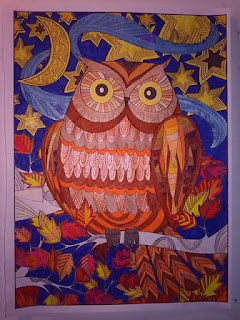 Posted by Alexandra Heep at 1:58 AM