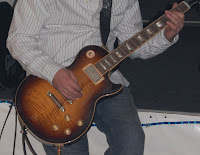 I am always thrilled when I can get people to guest blog. What makes it even more special is when they aren’t professional writers. See, for the longest time I did not pursue any of artistic or creative endeavors (writing included) because a teacher once told me I lacked creativity. Also, when I read books about how to engage in artsy pursuits, most said you had to have talent. I say we all have inborn sparks of creativity, but we all access them differently. For some it comes easy, to others harder, and many never try. So, whenever someone puts something out there that is noteworthy I, well, take note.


Such is the case with today’s guest post. It comes from a friend of mine who shares my passion for music (and Uriah Heep!) and is a faithful follower of my ramblings. Tom Middaugh is a 52 year-old self-described “rock n roll junkie.” Without further ado, I will let him have the stage to tell one of his exciting, true, rocking tales.

Back when I was 19 years old I was working for a company called Minnesota Fats Pool Tables and Games. My Father was the routing manager. They got an order to install a snooker table in a hotel suite at the Whitehall Hotel in downtown Chicago for a musician who would be staying here for a couple of weeks. That is all they knew. So my Dad sent me there because he knew I was into music and he thought I would think he was cool for sending me there.......little did he know...

Me and my partner show up and go to the front desk to check in and tell them why we are here and they tell us "Yes the party is in and they are expecting you," so we go up and knock on the door, and who opens the door.... Eric Clapton.

Needless to say we were both shocked. Eric says "come on in." So we installed the snooker table as slowly as we could so we could listen to Eric doing interviews over the phone to all the local radio stations.

When we were finally finished I had to ask Eric to sign the work order to say that he was satisfied with our work. I almost fainted, I was talking with Eric Clapton and getting his autograph on a work order!!! As we were collecting our tools and getting ready to leave, Eric said "You’re not going to leave are you, I was hoping that you might like to shoot a game or two with me before you go." Needless to say, you can't say no to Eric Clapton so we stuck around for an hour or so and shot a couple of games with him. When we left he had his manager call our office and tell them that we were so nice and set us up with second row tickets.

When he checked out of the hotel he autographed the table and had us take it back to our showroom. It was on display for about six months until someone came in and bought it for a butt load of money just because it had Eric's signature on it.
Posted by Alexandra Heep at 3:27 PM

Email ThisBlogThis!Share to TwitterShare to FacebookShare to Pinterest
Labels: Entertainment

What a great story! Just goes to show how well some celebrities manage to handle their success with sensitivity rather than tabloid stupidity. :-)

There you go..they do say to always "leave the door open" to wonderful things,like sharing the unexpected wonders with one another>

Great post - what an amazing memory to carry with you!
Lx

Wow! Eric Clapton! How cool is that? Too bad he wasn't playing his guitar as you worked. Now that would have been the best ever...of course, you might never have finished then! ;-)