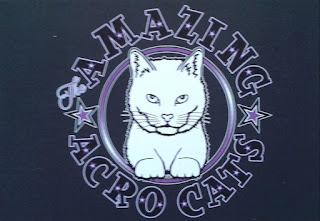 Some of my readers know that I love postcards, and some might know that I love cats. I am especially happy when I can combine both passions. As it is, the Coronavirus has affected every avenue of daily life since early 2020. One of these problems relates to the Rock Cat Rescue, a 501c3 organization that showcases the Amazing Acro-Cats.

The Amazing Acro-Cats used to travel the USA, but they are not allowed to under the nationwide restrictions that were put in place during the Corona crisis. Since that's their primary source of income, they now have to find alternate ways to make money to feed all the animals (mostly cats, but also a groundhog and a chicken). Many of them also have ongoing medical needs.

One of the ways they earn is through their online store. Until recently, it did not have postcards. The only postcard they used to have available was by going to the show and to get one onstage after (for a small donation). It showed three of the cats from their cat band (yes, a real thing). However, with the Corona problems in place, people send more postcards now because they make an inexpensive way to keep in touch with people.

So, the Acro-Cat owner created a set of 20 different postcards. Each card highlights one of the cats doing its most-loved trick. There are also two logo designs. Since the Acro-Cats feature a chicken and a groundhog too, each of those animals got its own card as well. All of the designs were professionally done and feature high-quality photographs.

Of course I ordered a couple of sets and started sending postcards out right away. Since I am a member of Postcrossing, an international postcard exchange site, this worked out perfectly. Many of the names I send to are cat, chicken or all-around animal lovers, so of course they make ideal recipients for these postcards.

The response has even been better than what I could hope for. People absolutely love these postcards! I also write a lot on the cards about the cat, the organization and its rescue efforts (all animals of the show are rescues, and they continually foster abandoned cats). Since the response has been so favorable, I decided to showcase each card on my blog. Until I get to work on that, here are some of the messages recipients have sent me:


"Thank you for the Captain Patch card and the story about him and the acro cats on the back. I'm going to look them up on youtube."

"Hey Alexandra, thank you very much for your nice postcard and stamps.
I love your postcard and the story of rescued animals. ...Greetings from Germany,"

"Hello, your card came today. Thank you so much. I like it soo much, wow a cat circus you are crazy, all the best for you, "

"Hello from Albuquerque, New Mexico,
What a fun card and cheers to the group that rescues the animals. I love Griffin (the groundhog) . ... I'll have to watch for the Amazing Acro Cats."

"I love the card. I have birds, but I love cats too. I've had quite a few in the past. I was watching the Acro Cats on youtube. Great stuff."

"Thank you so much for the amazing card. I had never heard of acrocats, but now I need to look this up. I have 5 cats (long story...) and could never imagine training them to do acrobatics beyond what they naturally seem to do at 4 am."

"Thanks for the awesome postcard!! I think that my son saw the Acro Cats on tour around 2009. unfortunately, he went with his other parent, and I did not get a chance to catch the show."

"I love the Ahi Tuna cat post card. I will have to look the show up on the internet - it looks like so much fun!"

"Thanks for the adorable postcard. I have never heard of these acro cats, but now I will have to learn more. =^.^= " 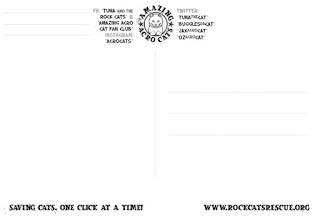 Posted by Alexandra Heep at 6:47 PM