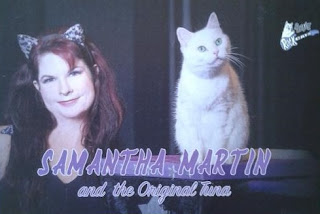 When you hear the word "tuna," you probably immediately think of fish. As the post has a cat picture, you most likely already guessed that this is a cat story, however. How Tuna ended up with her name - that I don't know - but I do know she is the reason the Amazing Acro-Cats exist.

Tuna was adopted by Samantha Martin, chief executive human of the Amazing Acro-Cats and the Rock Cats, aka Rock Cats Rescue (501c3 organization). While original Tuna was ornery around people, she was an intelligent feline that loved to learn tricks. Her desire for learning was a big catalyst to start the performing cat troupe.

I was lucky to see Tuna in 2016. She rang a bell to open the show, performed timed leaps and jumps, and played cowbell to close the show as part of the Rock Cats band. "Tuna, more cowbell" rings forever in my head!

She now goes by Original Tuna because she passed away from cancer January 2017, but her legacy lives on. Not just because she has a sculpture that adorns the show's cat-mobile, but she functioned as prodigy for two new Tunas: Albacore and Ahi. They now have their own bell-ringing duties, and I saw them live as well.

How did Samantha find two new white cats so conveniently? The animals find her because they are all rescues of some sort. Only a few get to stay, the others get forever homes. So far, over 200 cats found loving humans all over the USA.

To explain the picture above: Original Tuna (and other purrformers) were recently honored with their own postcards. I was first in line to buy a set (or two), and sent them out to recipients on Postcrossing (an international postcard exchange site).

For obvious reasons, this card was reserved for someone special - a cat. Yes, there are cat accounts on the site who love to send and receive postcards. I was lucky to draw the address of one in Germany (the addresses are all randomized). I chose to send this card to her because the recipient's favorite food is ... tuna. Here is what this lovely feline had to say about the card:

"Hello, your card came today. Thank you so much. I like it soo much, wow a cat circus you are crazy, all the best for you, "

My pictures were taken with an inexpensive, moderately intelligent phone, so they're not the best quality. The postcards you get from the store are professionally done. The unwritten backside looks cool too. (pointy finger)↓↓ Posted by Alexandra Heep at 1:50 PM