A to Z Challenge 2020: C is for Christmas Island 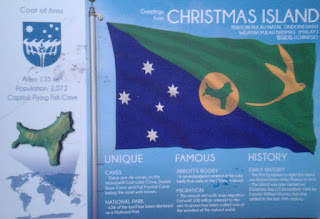 Christmas Island is an external territory of Australia, situated in the Indian Ocean. It is located south of Indonesia and Singapore. While not settled until the 19th century, it was named on Christmas day in 1643, 28 years after it was first sighted.

Despite the refreshing name, it has a tropical climate with temperatures that hardly vary throughout the year. Even the coldest month still sees over 70 degrees (in Celsius that's about 21) usually. Ethnically, most of its 2,000 inhabitants are Chinese descendants. It only measures 52 square miles (135 square kilometers).

Did you know that there are numerous Christmas Islands destinations? The other main one is part of Eastern Kiribati. It is located in the Pacific Ocean. It's pretty remote, sort of halfway in between Papua New Guinea and Mexico. There's also a Christmas Island in Novia Scotia, but it is a village.

Fun fact: Over 60 percent of Christmas Island (the one from where this card is from) is designated national park.

This postcard that you see above was a trade acquisition. It came to me with three other postcards in an envelope from Canada. Now, the postcard was stamped and cancelled at Christmas Island, but sent to her first in an envelope. I do love the unique crab cancellation. They use a crab because Christmas Island is famous for its annual Red Crab migration.

So, it didn't actually come to me directly. She put my address on the postcard and a short message to me, once the trade was established. That makes it look like it really came to me directly. I didn't work out the trade, a friend of mine in Italy did. It sounds a bit complicated and it's not my favorite way to get a card, but since it's difficult to get a postcard from there, I went with it. 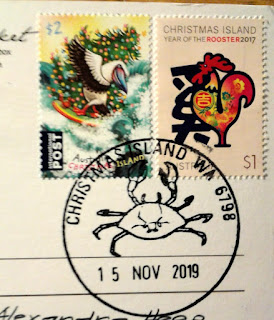 Ah! So there is an irony here. Name and climate stand in contrast.
Just like numerous Christmas Island- In maritime industry too -we comes across multiple ports with same name. Unless we specify the county name-its not clear with Port we are referring to.

Liked your post. A good dose of geography input here.

I love learning about new places from your postcard exchanges.

Thanks for sharing information about all these interesting places in the world.

Learning about another new place through your blog. I'm loving this.

Santa had to make pit stops across the globe is the reason why there are so many Christmas Islands. Interesting post and the postcard is a beauty, especially the stamp.

What a collection .
I am relishing all your posts

I have a penpal who requests postcards once in awhile. When we first started writing I sent them each time. Not so much anymore. Might be why they have slowed down in their responses ?? Interesting B & C posts. Trying to catch up today.
https://katytrailcreations.com/2020/04/04/documentation-letter-d/

Another interesting post. Really enjoying your A to Z.

That's interesting. There is a town called Christmas about 2 hours from where I live.

Monstrous Love from A to Z

I never heard of this Christmas island, thanks for sharing information, its a learning experience for me.