A to Z Blogging Challenge 2018: U is for Uzbekistan 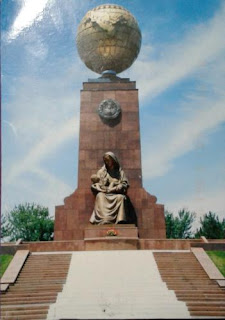 At first glance, this card might not seem that exciting, but it did come from a place I had to look up on the map. Uzbekistan is in Central Asia, and it borders Kazakhstan, Turkmenistan, Afghanistan, Kyrgyzstan and Tajikistan.

I'm not going to bore you with historical facts about Uzbekistan (you can look them up yourself), but I do want to describe the card briefly. (After all, that's the purpose of these posts). This card came from the capital of Uzbekistan, Tashkent. It depicts the Monument of Independence on Humanism, which is located at the city's biggest attraction, appropriately named Independence Square.

The stamps are rather boring, but I've included a picture because they don't come along every day. 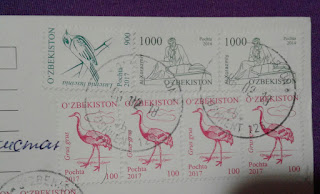 Interesting to have one from a place that is not always in the news, for the right or wrong reasons.