A to Z blogging Challenge 2018: M is for Monaco 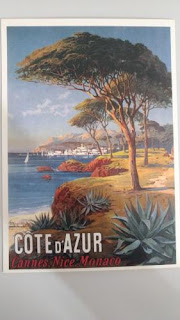 I've been fascinated with the principality of Monaco ever since I was a teenager, partially due to the death of Princess Grace in 1982 and the subsequent hoopla in the gossip magazines for years to come. Keep in mind that I grew up in Germany, so all this was a big deal there. I suppose my fascination was because of the ongoing coverage of Princess Stephanie's alleged "scandalous" exploits, who is just a couple of years older than I am.

While I've outgrown the gossip rags many years ago (thankfully), the receipt of this card made me wonder what ever happened to the royal family of Monaco. I did a quick Google check before writing this blog and was shocked to see how old Princess Grace's "kids" look. Of course they're now adults in their 50s and 60s, and it drove home the fact how OLD I AM now.

Anyway, this card was actually sent from someone who lives outside Monaco (in France, obviously) but works there. The card does have the Monaco stamp and was mailed from the principality, as you can see by the stamp image and postal cancellation. So, it is kind of unusual. It's strange what kind of memories postcards can jog loose. 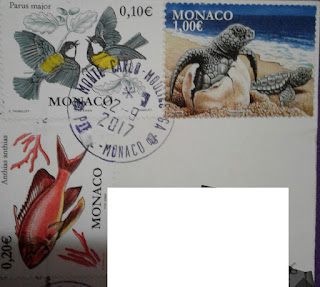 It was always made to be a fairytale kind of place. The pictures are beautiful.
https://moondustwriter.com/2018/04/13/mask-children-atozchallenge/