In a prior post, I talked about popular coloring media like markers, gel pens and colored pencils, but kept it contained to the types most people know. Well, during shopping trips for groceries and such I always keep an eye out for adult coloring books and different/unusual pens, markers etc. That's how I found the following. I wanted to do a separate post on them because I wanted to add pictures so you could see how these look when applied.

Crayola twistables (I found a 16 pack at Hobby Lobby and a 30-pack at Meijers). On the pic below, I used twistables on the cat's tail, the left side of the body, and the light parts of the head.

Pros: They are inexpensive (I found a set of 30 for around $6), they don't need sharpening, and they cover like color pencils without having to apply as much pressure. You can also apply several colors on top of each other for unique effects. You can erase mistakes when going over the lines, but keep in mind that you can't color over spots that you erased. So, when coloring inside a design, be careful. If you grab the wrong color by mistake, don't erase, but go over it with another color and work from there.


Cons: They have a blunt point (even though it's a small one), so it's a bit difficult to fill in small areas. I also read that once the "lead" inside the barrel breaks, that particular pencil is useless. Hasn't happened to me yet, thankfully. Also, it seems you're limited to the 30 colors as I haven't seen any bigger packs.

Also, they are waxy like crayons, not woody like pencils, even though Crayola calls them twistable color pencils. Some see that as a disadvantage, I love that factor though. 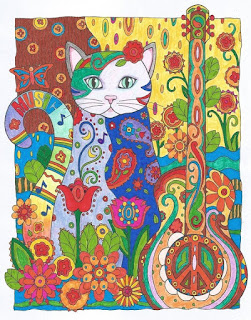 Glitter markers (Crayola, Martha Stewart): The first pic below was done with Crayola glitter markers, and on the second one I used the Martha Stewart type on the moon, stars, and for the blue stripes on the cat's body in the center.

Pros: Well, they are very sparkly and vibrant. That's about it. I think they were more created for scrap-booking purposes than for coloring.

Cons: These are bulky and a bit messy (don't put your hand on freshly colored surfaces). Plus, it's like trying to draw with a broom stick because the tips are so hard and bulky, so forget about coloring small areas. Also, while they look pretty in person, once you scan the picture into the computer, the effect is lost. Even with camera and flash you don't get the whole effect. 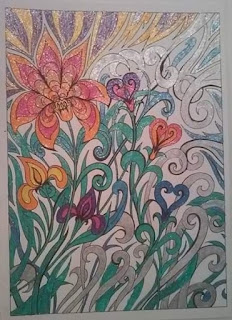 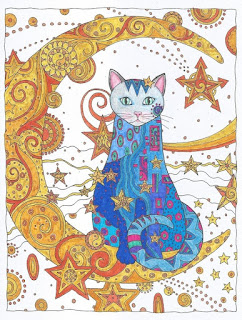 Faber Castell metallic gel sticks (I found these at Hobby Lobby). On the pics below, I used them on the "clouds".

Pros: They are fairly inexpensive, super creamy and blend well. They also give an almost three-dimensional effect.

Cons: They are super bulky and only good for big areas. 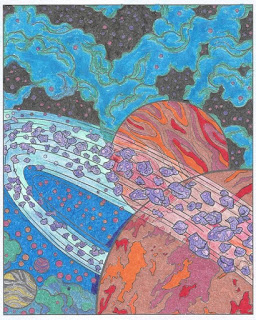 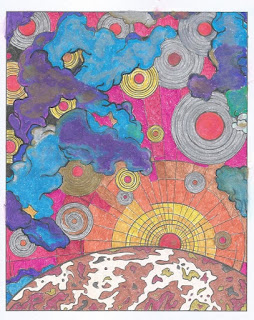 Posted by Alexandra Heep at 2:32 PM

Good to know of different things you can use. Will have to look for these.