Human Versus Cat Round 12 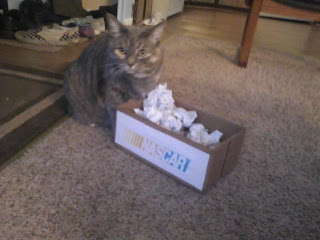 Yes, I've been slacking off posting Nascar results. If you don't know what this series is about, this post explains it.

Actually, the Michigan race picks were quite interesting. Here is how it all played out:

Now, while this total might not seem impressive, she actually picked four drivers who practiced in the top 5. Too bad the race played out a little differently, but all were pretty strong drivers.

Her point total of  1689 moved her up slightly in the standings (for all Nascar on Fox league players) to 41.6 percent. In the Brad Keselowski league that ranked her 747 out of 1211. Remember that her stats are skewed because I did not have her "play" the first 3 races of the season.

Dale Jr. blowing a motor killed my points, even though I picked the race winner (Greg Biffle) and guess what: The cat beat me by 12 points!

After this race, I dropped to 67.5 percent for all Nascar on Fox players with a point total of 2570 for the season. In the Ryan Newman league I was ranked 148 out of 412, another drop over last week.
Posted by Alexandra Heep at 12:28 AM

She was bound to beat you at some point!