Human Versus Cat Round 7 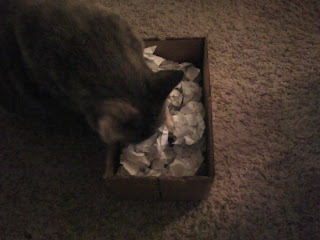 As I said in last week's post, we had to make new paper balls for Gracie so she could make her picks for the Talladega Race. (If you do not know what this is about, this post explains it). We were hoping that it would remove the scent on her "favorites," having picked two drivers four times already, which is the maximum allowed for the NASCAR on Fox fantasy league. 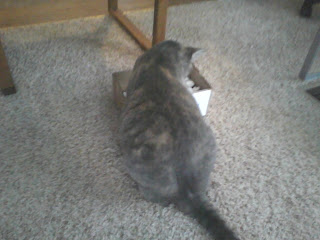 Her are the five numbered paper balls (drivers) she chose, and yes, she actually picked some different numbers this time around.Although, she was a little hesitant at first. I guess she was confused by the black Sharpie smell (from when I wrote the numbers on the papers). Prior papers were numbered with ink pen, but it was hard to read those after uncrinkling the paper balls.

51 (Regan Smith)
5 (Kasey Kahne)
98 (Michael McDowell)
48 (Jimmie Johnson)
11 (Brian Vickers/Denny Hamlin) The reason I listed two drivers is because Denny Hamlin was injured during a prior race and Brian Vickers is his relief driver.

If you follow NASCAR, you know that Talladega is one of only two restrictor plate tracks and because of the nature of the racing there, just about anyone has a shot at winning.

That made it difficult for me to make my picks as picking winners for a restrictor plate race is somewhat of a crap shoot. Here are my picks:

I am really annoyed with this week's result because they shorted Gracie by points. See, when I selected the 11 car for the lineup it would not let me choose Denny Hamlin for it as it said "not entered," even though he started the race and earned the points. So, I selected Brian Vickers. Here is what happened during the race: At the first caution Denny got out and let Brian Vickers finish the race. Yet, Gracie got 0 points. Not fair, as Brian Vickers  was the only selection they allowed for the 11 car. I am really mad about this, but what can I do. Anyway, here is how it all played out:

Gracie scored 76 for Regan Smith, 2 for Kasey Kahne, 23 for Michael McDowell and 40 for Jimmie Johnson for a total of 141 points. She moved up in rankings for the sub league to 783 out of 1188 with a 35.9 percentage of all Fox players. Remember that her stats are skewed because she did not participate in this during the first three races of the season.

I scored 54 points for Dale Jr., 19 points for Paul Menard, 42 points for Carl Edwards, 40 points for Michael Waltrip and 22 points for Jamie McMurray for a total of 177 points. I moved up in rankings for the sub league to 163 out of 401 with a 62.3 percentage of all Fox players.