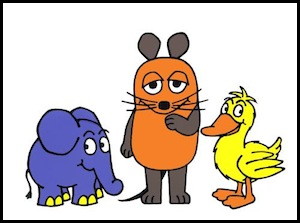 Die Sendung mit der Maus is German and translates to "The Program With the Mouse." It is a show I watched in Germany as a kid. However, I had forgotten about it until I saw a postcard on Postcrossing that depicted the mouse. I didn't even remember the title, so I did some Googling, and here we are.

If you want a detailed explanation (in English, but there's a button for German), here is a cool link that explains it all. The shorter version is: The three main characters are simply named Maus, Elefant and Ente (mouse, elephant and duck). They sporadically appear in a half-hour educational program for children. It somehow compares to Sesame Street.

What's interesting to note is that the Maus is much larger than life. Elefant, while much smaller, is stronger. They don't speak, but they make noises. There is a very distinctive  clack-clack sound when the mouse blinks its eyes. I now collect the postcards. So far, I have eight. I don't buy them, these are part of the random exchanges that take part on Postcrossing.

Do you have a favorite childhood character?