A to Z Blogging Challenge 2018: E is for Eclipse 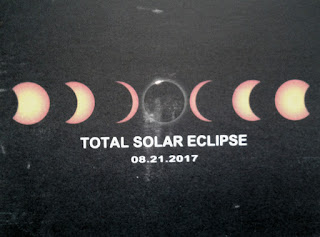 This card you see above was sent to me from a lady in Salem, Oregon. I found her in a postcard group on Goodreads. She said she was sending out commemorative cards from the total solar eclipse event she attended in person on August 21, 2017. She was in a spot where the sun was 100 percent covered by the moon. The card shows the different stages of a total solar eclipse.

This particular eclipse was visible where I live too, but we were not in the path of totality. We saw about 85 percent coverage (meaning the moon covered the sun by that much). If you want to know what all that means, check out this NASA site that's devoted to the 2017 solar eclipse.

Oh, and the stuff that looks like Schmutz on the image is courtesy of the U.S.P.S. machines that like to put their marks on cards. I'm not fond of those machines, but that's a whole other topic.

Incidentally, I received another card from an eclipse watcher on March 28, 2018 through Postcrossing (the postcard exchange site). The lady who sent it lives in Wisconsin, but she traveled to Nebraska to see the total eclipse. (Why she didn't go to Carbondale, Illinois, I don't know. It would have been a shorter trip, I think.) Anyway, this is what she wrote:

"I traveled 750 miles to Nebraska last summer to see the eclipse. It was magnificent!."

She designed the card herself from a picture she took (see below). The description on the back reads: Diamond Ring, Total solar eclipse. Grand Island, Nebraska USA. 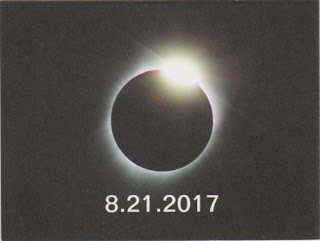 I saw the partial eclipse from Boston and it was spectacular.

Great card she sent to remember the year of the eclipse!