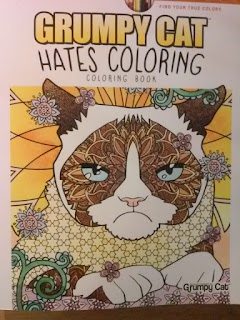 I'm not one to jump on any bandwagons, and most everything that is popular or that people love, I hate. Grumpy Cat is the exception. I've been a Grumpy Cat fan since the early days when the memes first started circulating on Facebook. Since Grumpy Cat hates most everything as well, I can identify with her demeanor. So, that's one of the very few times I don't mind participating in the merchandise craze, although I do keep it contained. Small living space, smaller wallet/pocketbook and all that.

However, when I found out in April that the humans behind Grumpy Cat were releasing an adult coloring book as part of the Creative Haven series by Dover Publishing which I absolutely love, I had to have it.  I pre-ordered it on Amazon. Yesterday (July 21) was the day it finally arrived (5 days earlier than Amazon had promised).

The first copy had a major ink smear across two pages of the book. I chatted with an Amazon rep, and within six hours I had a new copy (and I don't even have Prime). Now, this one is a bit smeary as well, but it's contained mostly to the back of one page, which is blank anyway, so I'll let it go. It has been extremely hot here and the book is literally fresh off the press, hence they get a pass.

Anyway, to the book itself. A lot of the designs do have quite a bit of "ink" in the design (see example below). So, it's definitely not a "childish" book, unless  you think the whole Grumpy Cat movement as childish. In that case, I can't help you.

The designs are definitely oriented towards adults or experienced colorists, but with an animated/cartoonish vibe. That's because of the illustrator, Diego Jourdan Pereira whose design credits include Toy Story, WWE, Transformers and LEGO.  However, a lot of the illustrations also have a zentangle-type composition. In true Creative Haven fashion, the pages are perforated for easy removal and feature one design per page (reasons why I love the Creative Haven books). The inside and outside cover have completed designs for color inspiration.

I give this adult coloring book two paws up. Oh, and there is already another one in the woks, "Grumpy Cat VS the World," which will be released in September 2016. 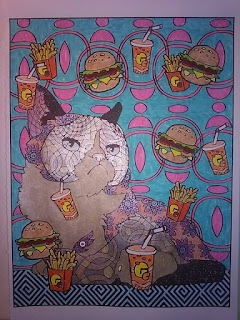 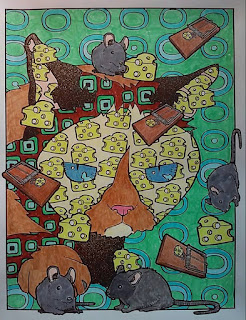 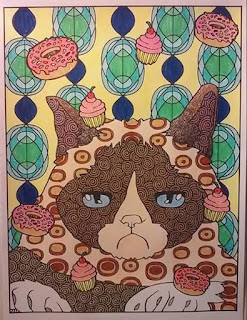 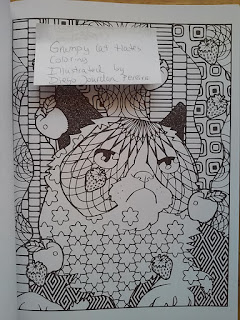 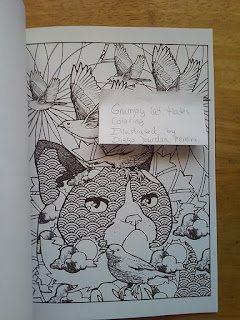 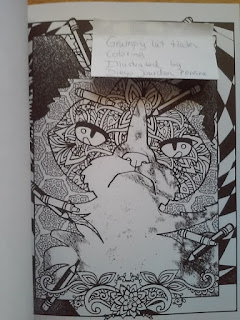 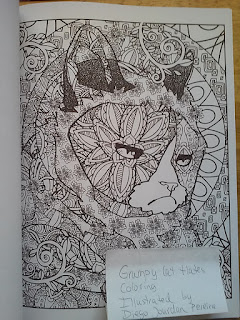 I like grumpy cat too Alex. The animal and the things she has to say. I hope you have lots of fun with your coloring book and I'm sure we'll see the results on FB.