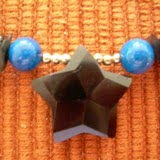 While I normally resist labels, if I had to pick one, I’d say I am a dark hippie. I coined that phrase about three years ago, or so I thought. Despite some of my friends’ initial insistence that you can’t be a dark hippie, I actually found the word today in the Urban Dictionary. Hey, they forgot to credit me!

Actually, the dictionary has two definitions: “A person who follows both the Goth scene and the neohippie movement at the came time, also called a Gothic hippie;” and “a word we use to make fun of goths, emo, etc.” Oh dear. Those labels I do not like.

Now, I do not “follow” anything, nor do I know what a neohippie movement is in the first place. Also, I am not Goth, even though I have been known to secretly listen to some of what could be considered Goth and even Emo music. But, I also listen to music like Iron Butterfly, the ultimate in heavy psychedelic, although I would not be caught dead wearing those outfits. Actually, looking at them too long would likely give me seizures. So, I need something to balance that out – and that is black. While I like to wear black, not everyone who does so is dark, Goth, or Emo just like not everyone who wears bright is a hippie. At least in my opinion.

How do I define dark hippie? Well, on the outside, I choose several ways to express that. I like black clothes, but I will pair them with something bright, usually a beaded necklace – I make those myself by the way – or a bag or shoes in jewel-tones. Not just any black will do, it has to have some frills to it – that is what gives it the vintage appeal. I also have a teal-colored, fringed leather jacket that is quite old. Now, of course I do not dress this way to go the grocery store. These used to be my going out clothes.

What is a dark hippie on the inside? To me, it is someone who is in balance. The happy, tree-hugging hippie who enjoys peace and love, but with a dose of reality because let’s face it: We have created a pretty messed up environment.

I am not the only one who considers herself a dark hippie. My daughter and a lot of my friends, who felt lost when asked to describe themselves, love this phrase and can identify with it. Also, I share my birthday with Jim Morison, perhaps one of the first, and best, examples of a dark hippie. So, we are kindred spirits, minus the substance abuse of course.
Posted by Alexandra Heep at 1:25 AM

Since you're taking about descriptive labels, make mine "Grey ONATAH"-- Iroquois name meaning of the earth." I don't fit the hippie mold exactly, and didn't in the 1960's either.

Check out some cool (and funny) Native American names here:http://www.bronsonbattlecreek.com/services/birthcenter/nativeambabynames.shtml